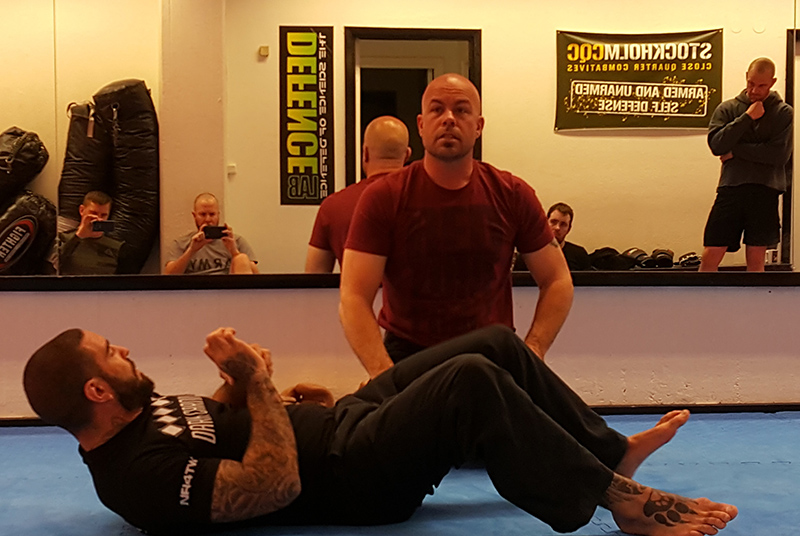 This is a question I am often asked about RZTM (second only to my mom asking if I’m still doing Karate) I decided to start finally using this BLOG to help give people an idea of what the heck Red Zone Threat Management is all about (my mom will still insist it’s Karate). It’s not unusual that people immediately associate RZTM with knife defense. The Red Zone Knife Defense Program was the first program I created that was uniquely my own recipe. This was back in 2003 and was released on VHS as nobody was moving to DVD yet. Also worth noting I still had a little hair then. The Red Zone Knife Defense Program was pretty unique then as, for the most part, Kali was considered the pinnacle of edged weapon training. We gained a lot of traction with the elements of the martial arts community who were interested in what really works in a self preservation scenario.

The next addition to the curriculum was Red Zone Prime. This is the culmination of what I had been teaching and refining for realistic self defense from an empty hand perspective. The book which was released in 2014 has sold hundreds of copies world wide.

Because of the focus of streamlining the empty hand encounters in the Prime program people kept asking what I teach for striking or do I even teach striking. This was the inception of the Adaptive Striking Program which breaks down where the striking elements fit into the self defense equation (hint: it’s not the focus).

The most recent addition to the curriculum is the Groundfighting Overview (GFO) this program addresses our streamlined formula for what works best when the fight goes to the ground with and without weapons involved.

I just wanted to address this issue here finally.

This website uses cookies to improve your experience while you navigate through the website. Out of these cookies, the cookies that are categorized as necessary are stored on your browser as they are essential for the working of basic functionalities of the website. We also use third-party cookies that help us analyze and understand how you use this website. These cookies will be stored in your browser only with your consent. You also have the option to opt-out of these cookies. But opting out of some of these cookies may have an effect on your browsing experience.
Necessary Always Enabled
Necessary cookies are absolutely essential for the website to function properly. This category only includes cookies that ensures basic functionalities and security features of the website. These cookies do not store any personal information.
Non-necessary
Any cookies that may not be particularly necessary for the website to function and is used specifically to collect user personal data via analytics, ads, other embedded contents are termed as non-necessary cookies. It is mandatory to procure user consent prior to running these cookies on your website.
SAVE & ACCEPT
PageLines